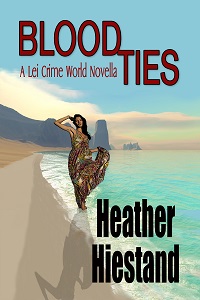 During a heat-soaked summer in California, an innocent woman falls into the path of a drug kingpin.

Sacramento Police Department records analyst Roselyn Ridge has always wanted to find her father. Her best friend would prefer she look for romance instead. When Roselyn takes a website DNA test, she learns she has a Pacific Islander grandparent. After she attempts to learn more, strange things start to happen. Drug dealers appear in her quiet neighborhood. Someone tries to run her over when she’s out jogging. All this during the same week Roselyn starts dating again.

Nothing interesting has ever happened to Roselyn before, but she’s beginning to think ignorance was bliss. Now, if she doesn’t solve the mystery of her father, she risks not surviving to start a family of her own with the attractive Hawaiian man she’s just met.

Like Loading...
Look Inside
Disclosure of Material Connection: Some of the links in the page above are "affiliate links." This means if you click on the link and purchase the item, I will receive an affiliate commission. I am disclosing this in accordance with the Federal Trade Commission's 16 CFR, Part 255: "Guides Concerning the Use of Endorsements and Testimonials in Advertising."

Sexy ways to save a relationship...