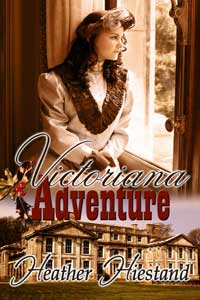 Marooned in backward Victoriana by a magical Christmas cracker, Ollie Brown wants to get home to modern Tacoma. The enticing girl who shelters him tempts him to stay in this alternate reality, but what does a nineteenth century princess need with a twenty-first century skateboarding chemist in a world where science is banned?
Princess Lenchen thrills at the chance to assist the handsome stranger who speaks of oddities like candy bars and “grinding.” Ollie offers a breath of freedom, but Lenchen knows he feels trapped and out of place. She reluctantly tries to help him find a way back to his world, though she longs to know more about him—and to escape her cloistered life in the widowed Queen Victoria’s court.
Every girl wants her own Cinderella story, even if she’s already a princess—but if Ollie stays with her, will he be allowed to be himself?

Holiday in the Heart
Look Inside
Disclosure of Material Connection: Some of the links in the page above are "affiliate links." This means if you click on the link and purchase the item, I will receive an affiliate commission. I am disclosing this in accordance with the Federal Trade Commission's 16 CFR, Part 255: "Guides Concerning the Use of Endorsements and Testimonials in Advertising."