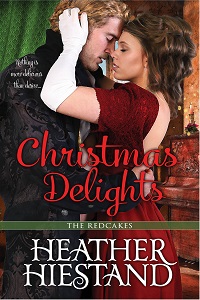 This extract from my new release had to be cut from Chapter One! It is one of three mini-stories I made up as part of my holiday house party tale.

from Christmas Delights, Chapter One:

“I know a story about birds,” Miss Redcake said dreamily. “I particularly remember it because my cousin Lewis used to make automaton birds. They spoke in the eeriest voices. When I hear the story I think of his creations.”

“Oh, do tell,” Penelope urged. “You can stop any time you feel out of breath.”

Miss Redcake nodded. “This is the story I was told. In Roman times, Clementina was trying to escape from a lover who’d become too insistent when they’d taken an after-dinner walk. She ran into a fen, to hide on a peat mound among the tall grasses and spindly willows, hoping the sounds of bird calls would hide her slow progress along the sand. It had rained a great deal, being spring, and she left footprints in the clay. But before she went deeper into the fen, she turned, fearfully, to look for her tormentor, and saw that her footsteps were being filled in by wildflowers.” Miss Redcake paused and sniffed her salts.

“My goodness,” murmured Victoria. Another spurned lover tale. She’d rather hear one about a lover catching the girl and laying her down in a meadow of wildflowers.

But no, Miss Redcake had a more poetic soul than she. “When Clementina turned back, she found her way blocked by a tall figure. The light was descending by then and she only had a faint impression that this was a man in a cloak or a habit. A monk perhaps? A traveler?

“Clementina stepped forward, holding out her hands in imprecation. When she looked back again, sure she’d heard footsteps, she found reeds had grown up all around her and the figure. Protection or imprisonment? She did not know.”

“Good heavens,” Penelope breathed, letting the bag of peppermint candies she’d taken out of her pocket drop to her lap.

Miss Redcake smiled. “The sound of footsteps diminished. The figure in front of her raised its arms. Clementina shrank back, then all of a sudden, the figure dissolved into hundreds of sedge warblers. Their frantic squeak chirr calls sounded in deafening repetition. But five seconds later, the birds were gone, flown over the reeds. And Clementina was alone, her virtue safe for another night.”